Chili patch is a transdermal patch used for relieving body pains. When there are pains on the body, the best way to relieve the pains is not drug or western medicine. It is an herbal remedy. 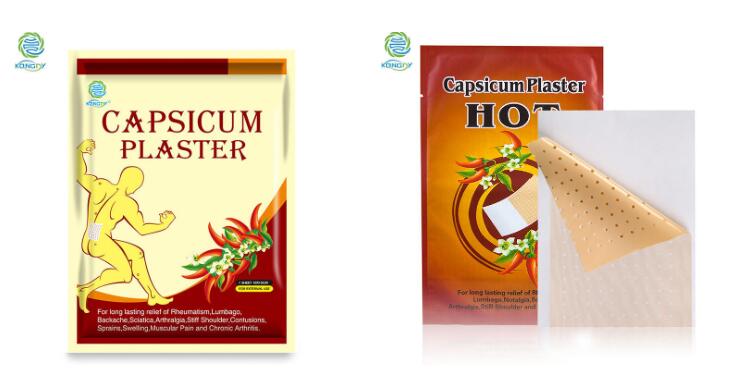 How to customize the chili patch?

First, the ingredients, we can make the different formula of chili patches. The normal ingredients are capsicum extract, menthol, camphor, and other Chinese herbal ingredients. According to different requirements, we can adjust the percentage of the ingredients. Then the patches can be hot or cold. So as to meet different demands. We can also customize a chili patch size, color, and package. The size can be large, small; the shape can be round, square; the color can be white, skin, yellow, etc. About the package, our designers can make different designs according to customer’s demands. That sounds so great, right? It not only good for consumers, it also has big benefits for distributors and wholesalers.

We all have felt the aches, pains, and muscle injuries, but for active athletic people, it can be a weekly occurrence. And believe it or not, you can relieve your aches and pains with one natural ingredient: chili. Henan kangdi medical, chili patch manufacturer, can customize the chili patch you want.

Most people just think about chilies as maybe the big fat red chilies or the green ones in the supermarket, but there are just so many other types of peppers out there. And some could be much hotter than others, like to the point of almost being dangerous to eat. Pepper heat is measured on the Scoville scale. The higher the number of units on the Scoville scale, the spicier the chili will be. Jalapenos you might see sliced up on the top of your pizza are about ten thousand Scoville units. The hottest chili at the moment in the world originates from Northern India and is called the ghost pepper. The ghost pepper measures at just over one million Scoville units!

There is a chemical in chili called capsaicin and as well as giving them their hot taste, it can be used to relieve pains when applied to the skin. Substance P is a small peptide that is released in the body when the body needs to deal with the body's pain threshold and is emitted by the nervous system. The more capsaicin contained in the pepper, the spicier, and the higher amount of Scoville units. When applied to the skin, peppers cause substance P to be created which is a pain transmitting chemical that is released from the nerve endings. Once these transmitters are gone, the pain is relieved. Peppers produce a warming sensation, reduce pain, and also are a great anti-inflammatory. So it works in three different ways to combat body pain.

No matter what kind of different chili patches you need, remember to contact us. Let us customize a chili patch for you.